“To go to the sea is synonymous with letting go,” why time spent near water is the secret of happiness

Coastal environments have been shown to improve our health, body and mind. So should doctors start issuing nature-based prescriptions?

After her mother’s sudden death, Catherine Kelly felt the call of the sea. She was in her 20s and had been working as a geographer in London away from her native Ireland. She spent a year in Dublin with her family, then accepted an academic position on the west coast, near Westport in County Mayo. “I thought: ‘I need to go and get my head cleared in this place, to be blown away by the wind and nature.’”

Kelly bought a little house in a remote area and surfed, swam and walked a three-mile-long beach twice a day. “I guess the five or six years that I spent there on the wild Atlantic coast just healed me, really.”

She didn’t understand why that might be until some years later, when she started to see scientific literature that proved what she had long felt intuitively to be true: that she felt much better by the sea. For the past eight years, Kelly has been based in Brighton, researching “outdoor wellbeing” and the therapeutic effects of nature – particularly of water.

In recent years, stressed-out urbanites have been seeking refuge in green spaces, for which the proven positive impacts on physical and mental health are often cited in arguments for more inner-city parks and accessible woodlands. The benefits of “blue space” – the sea and coastline, but also rivers, lakes, canals, waterfalls, even fountains – are less well publicised, yet the science has been consistent for at least a decade: being by water is good for body and mind.

Proximity to water – especially the sea – is associated with many positive measures of physical and mental wellbeing, from higher levels of vitamin D to better social relations. “Many of the processes are exactly the same as with green space – with some added benefits,” says Dr Mathew White, a senior lecturer at the University of Exeter and an environmental psychologist with BlueHealth, a programme researching the health and wellbeing benefits of blue space across 18 (mostly European) countries.

An extensive 2013 study on happiness in natural environments – to White’s mind, “one of the best ever” – prompted 20,000 smartphone users to record their sense of wellbeing and their immediate environment at random intervals. Marine and coastal margins were found by some distance to be the happiest locations, with responses approximately six points higher than in a continuous urban environment. The researchers equated it to “the difference between attending an exhibition and doing housework”.

Although living within 1km (0.6 miles) of the coast – and to a lesser extent, within 5km (3.1 miles) – has been associated with better general and mental health, it seems to be the propensity to visit that is key. “We find people who visit the coast, for example, at least twice weekly tend to experience better general and mental health,” says Dr Lewis Elliott, also of the University of Exeter and BlueHealth. “Some of our research suggests around two hours a week is probably beneficial, across many sectors of society.” Even sea views have been associated with better mental health.

White says there are three established pathways by which the presence of water is positively related to health, wellbeing and happiness. First, there are the beneficial environmental factors typical of aquatic environments, such as less polluted air and more sunlight. Second, people who live by water tend to be more physically active – not just with water sports, but walking and cycling. 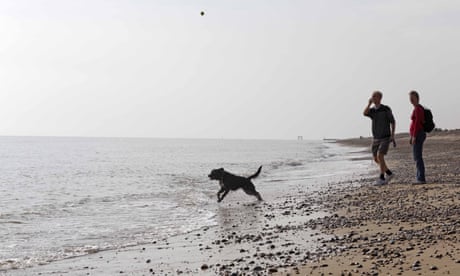 A stroll by the sea will help you sleep longer, study finds

Third – and this is where blue space seems to have an edge over other natural environments – water has a psychologically restorative effect. White says spending time in and around aquatic environments has consistently been shown to lead to significantly higher benefits, in inducing positive mood and reducing negative mood and stress, than green space does.

People of all socioeconomic groups go to the coast to spend quality time with friends and family. Dr Sian Rees, a marine scientist at the University of Plymouth, says the coastline is Britain’s “most socially levelling environment”, whereas forests tend to be accessed by high-income earners. “It’s not seen as being elite or a special place, it’s where we just go and have fun.

“By spending time in these environments, you’re getting what we call ‘health by stealth’ – enjoying the outdoors, interacting with the physical environment – and that also has some different health benefits.”

Even a fountain may do. A 2010 study (of which White was lead author) found that images of built environments containing water were generally rated just as positively as those of only green space; researchers suggested that the associated soundscape and the quality of light on water might be enough to have a restorative effect.

Although participants rated large bodies of water higher than other aquatic environments (and “swampy areas” were rated significantly less positively), the study suggested that any water is better than none – presenting opportunities for beneficial blue space to be designed or retrofitted. “You can’t change where the coast is, but when we’re talking about translating the benefits to other types of environments, there is nothing to stop a well-designed urban fountain,” says Elliott.

The coast does seem to be especially effective, however. White suggests this is due to the ebb and flow of the tides. He points out that rumination – focusing on negative thoughts about one’s distress – is an established factor in depression. “What we find is that spending time walking on the beach, there’s a transition towards thinking outwards towards the environment, thinking about those patterns – putting your life in perspective, if you like.”

When you are sailing, surfing or swimming, says White, “you’re really in tune with natural forces there – you have to understand the motion of the wind, the movement of the water”. By being forced to concentrate on the qualities of the environment, we access a cognitive state honed over millennia. “We’re kind of getting back in touch with our historical heritage, cognitively.” Water is, quite literally, immersive.

Harnessing the power of blue space could also potentially help to alleviate inequality. “One of our recent papers finds that the benefits of coastal living are strongest for people living in the poorest areas,” says Elliott. For that reason, it is crucial to ensure everyone has access. With proximity to water associated with at least a 10% premium in house prices, White is concerned by the exclusivity of seaside urban development. “What will happen is you’ll get this kind of gentrification, where the people who benefit most will get squeezed inland.”

Access provisions under the revised Marine and Coastal Access Act, which is due to be completed next year, will help, says White. But seaside communities are particularly vulnerable, imminently from seasonal fluctuations in income and environmental degradation, and, in the longer term, sea level rise and extreme weather due to climate change.

Rees says that the benefits of marine environments for our wellbeing are tied to the health of those environments, and that conservation efforts need to factor in the “natural capital” of blue space in supporting our wellbeing. Kelly’s work has found a link between a sense of personal connection to the sea and environmentally friendly behaviours; researchers hope that we may be more inclined to protect blue space if the health benefits are proven.

“To go to the sea is synonymous with letting go,” says Kelly. “It could be lying on a beach or somebody handing you a cocktail. For somebody else, it could be a wild, empty coast. But there is this really human sense of: ‘Oh, look, there’s the sea’ – and the shoulders drop.”