IS YOGA DEAD? AN INTERVIEW WITH “YOGA IS DEAD” PODCAST CO-CREATORS JESAL PARIKH AND TEJAL PATEL by Lara Falberg

A few months ago, I was scouring the Internet seeking out inspiring yoga teachers I might not yet be aware of. Happily, I came across an outstanding article written by Jesal Parikh and Sophie Griffiths called 19 Teachers of Color to Watch in the Yoga World in 2019. I loved reading about all of these remarkable instructors and how they’re setting the landscape of yoga on fire. One in particular really caught my attention, Tejal Patel, who is doing incredible things to advocate for inclusivity, diversity, and accessibility in the yoga world. I was also thrilled to read that she and the article’s co-author, Jesal Parikh, who like Tejal is an Indian-American yoga teacher, were launching a podcast called Yoga Is Dead. Immediately, I wanted to know more.

I checked out their website and discovered this would be a sincere tell-it-like-it-is podcast about what’s going on in Western yoga culture. Episodes would tackle subjects such as yoga’s relationship to power, privilege, fair pay, cultural appropriation, gurus, and capitalism. Their aim was to elevate the voices of those who are oppressed, and jumpstart crucial conversations.

I reached out to ask about when the podcast would launch. Tejal was kind enough to get back to me, and Jesal sent me a follow-up email to let me know when the first episode was live. After listening, I reached back out to inquire if Jesal and Tejal would be game for an interview. Even though the response to the podcast has been immense and they’re busier than they could have ever imagined after airing only two episodes [Note: At the time of this interview’s publication, three episodes have been released.], they were excited about being interviewed for Yoga International and made the time to speak with me. Our conversation follows below. 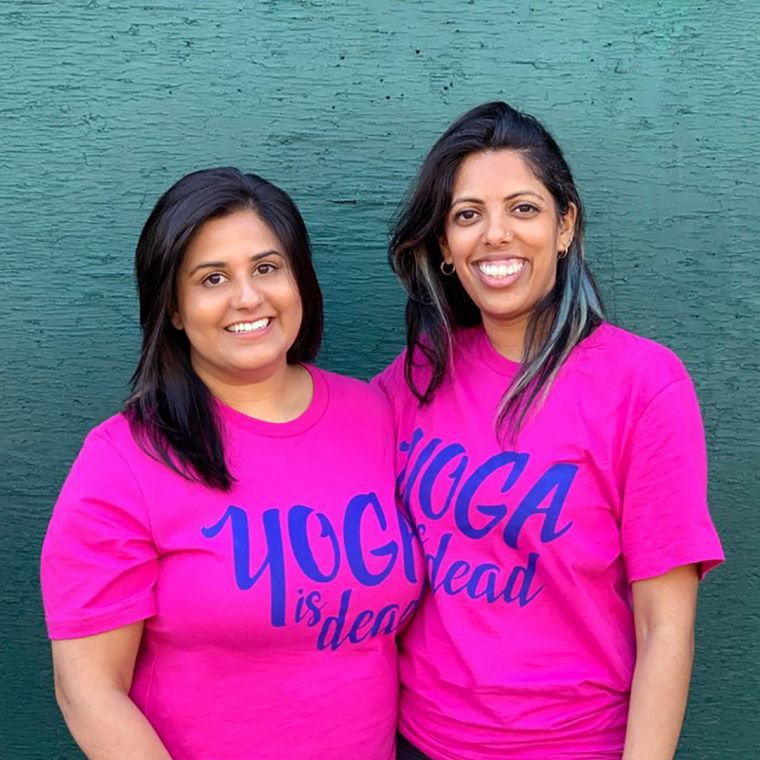 The Yoga Is Dead podcast’s purpose and mission is to expose the underbelly of yoga and wellness culture. Can you describe how and why you landed on this path?

Jesal: We decided to go down this path because of our own personal experiences. Our discussions surrounded the little aggressions and big issues that we felt and observed constantly, and that was the beginning genesis of deciding to do a podcast. We came up with all kinds of topics that were both personal experiences and questions we’re grappling with in the industry.

Tejal: Originally, we thought about talking about our different mindsets on certain issues. About how we approached each topic with varying ideas. Eventually, as we sussed out our topics and material, we realized something beautiful. We come at our viewpoints differently, but wind up being on the same page. So that felt like the more authentic way to format the podcast.

In the first episode, “White Women Killed Yoga,” you discuss marginalization in yoga culture. Why do those who don’t experience marginalization (thin, white, wealthy, young, cis, able-bodied people) shy away from examining the truth about how they hurt others by perpetuating the status quo?

Jesal: We’ve narrowed it down to two areas. [First], those people benefit from the status quo. If you’re benefiting, you’ll have to give up power to change things. They like the idea of social equality, but not the reality of what having less power means. Second is identity. Being Indian-American and coming from immigrant families, we’ve had to grapple with our identity our whole lives. We see that as a bridge and can understand both points of view. Those who fit within the status quo have never had to struggle with identity. Tejal says exploring identity is a skill, a learned skill. And if you’ve never had to do it, you don’t develop the ability.

Tejal: On top of it being a skill, you need to have the awareness that it’s not the same experience for all people. In our first episode, we’re zeroing in on white supremacy culture because that is the dominant culture. When people of color challenge the white culture point of view of never having to understand what it’s like to be the minority, we’re met with defensiveness, anger, shame, fear, and tears or white fragility. Those who haven’t been othered or excluded or discriminated against tend to have a hard time believing this is the reality for many people of color.

Many people are confused or refuse to see the difference between cultural appropriation and cultural appreciation. Can you explain how this plays out in yoga culture?

Tejal: We actually discuss an example of this in the first episode, “White Women Killed Yoga.” We discuss an instance of wearing a bindi [as] co-opting a symbol from a different culture, and reacting with “I didn’t mean any harm, so it’s okay” or “No worries, my intentions are good.” When you’re in a position of power and you incorporate a cultural symbol, such as the bindi, into yoga, you do have a responsibility to understand the effects of this choice and why it’s harmful.

Jesal: The first thing to understand about cultural appropriation is the power differential in the dynamic. There’s a dominant group with power and a non-dominant group with very little power. When the dominant group takes something from the non-dominant group, they are not penalized for it because of the power structure. The non-dominant group is penalized for retaining their own customs. For example, if a white person wears a sari, it might be seen as beautiful, fashionable, and colorful. When I wear a sari in public, which I’ve done many times, people will yell, “Go back to your country.” Another key component is the context. If you’re at an Indian celebration and someone puts mehndi on your hands, sure, that could be considered appreciation. You’ve been invited in by that cultural group in a specific context.

Tejal: How much of Indian culture are you going to attribute to yoga? What does wearing a sari or bindi have to do with practicing yoga? Why is anything Indian-culture related automatically a part of yoga?

You’ve received an overwhelming response to Yoga Is Dead. What’s been some of the more surprising feedback?

Tejal: The growth is surprising. We expected more people to dissent versus agree with us. I was shocked and taken aback when we sent out our last tip sheet for allyship for yoga business owners. Someone sent a direct message to ask about the wording on a tip: “What’s a POC?” This told us that we’re reaching people who are not familiar with these concepts and terms. I answered, “Thank you for your bravery in asking. For anyone who doesn’t know the acronym, POC means People of Color.” We love the supportive comments, but we engage with everyone. When it becomes too much and certain people are asking too much of our time and attention, that’s where the boundaries need to be set.

Jesal: There is a small contingent of people that are with us who don’t understand that it’s not about asking for a pat on the back for doing one great act. This work is ongoing and lifelong. It doesn’t stop with doing one good thing.

In the first episode, “White Women Killed Yoga,” you offer several truly excellent actionable steps those who are not marginalized can take to be good allies. Can you give an example of one?

Jesal: Go be the only white person in the room. You’ll have to do the thought exercise even building up to doing it. Where am I going to find somewhere to go do this? How am I going to feel going there? Will I feel safe? Being the odd one out may help with starting to chip away at what it feels like for people of color every day. It will never be quite the same since that sense of privilege follows you everywhere, but it may begin to help you understand to some degree what it’s like for us. That little bit of compassion may start to open some doors.

Tejal: This is for the business owner or anyone who is in a position of power: Examine the structure within which you operate to consider how you can give away some of that power. That’s really the first step. Then start to hire people of color in all levels of your organization, including ownership and leadership positions, to make it equitable and share in the decision making. Getting people to the point where they can critically think about their role in marginalization and consider why they don’t want to give away their power is how we move forward. When people stop gripping and understand that when they let go, they’re actually open to receiving more.

Jesal: Also, my experience is that when people start to really consider these concepts, their immediate reaction is to help others understand. First, start with you. Work on yourself and your own ideas of privilege and power. If you don’t work on you, you’re incapable of helping others.

As you mention in episode two, “Karma Capitalism Killed Yoga,” non-compete clauses have become common additions to yoga teachers’ contracts. What advice do you have for teachers about how to handle this?

Jesal: If you feel that you have the choice to walk away, do so. However, if you don’t, you can try to negotiate. Get into the specifics. If [a contract is] too broad, that’s a red flag.

Tejal: Understand what it means to be an employee or an independent contractor. Make certain you understand the classification. What do they actually want you to agree to in regard to considering competition? This episode empowers everyone from the studio owner to the teacher to the student.

Jesal: Approach things with a professional mindset. The interview process goes two ways. They want loyalty. That’s understood. But will you be happy there working within their expectations? Can everyone be happy? Also, organize with others. There’s power in numbers. We get tricked by the veil of spirituality in yoga commerce. Ask yourself, If this was any other business, would I be handling this situation differently?

In episode two, you call out the fact that often yoga teachers, both new and experienced, are asked to teach for free and do a variety of things for which there is no offer of money in exchange for service. What’s one piece of counsel you can offer to teachers so they don’t get taken advantage of?

Jesal: Don’t work for free for a for-profit company. If you want to work for free to get experience, do it on your own terms; teach your friends and family.

Tejal: There are plenty of ways you can build your portfolio on your own and do it on your terms. It will help your entrepreneurship, marketing, confidence, budgeting, and organization skills. All the skills you need in becoming a solid yoga teacher anyway. It’s not an easy gig. We invest a lot of money into doing this. We have to advocate for ourselves right from the get-go. Understanding karma helps you consider how you might have been taken for a fool. We had our blinders on too. Create the experience on your terms.

It’s (been) time for a revolution in yoga world.

We are in the midst of a revolution in Western yoga culture. These two teachers are provocative change-makers and they’ll inspire you to become one too. You can support them by listening to the podcast, following them on Instagram, sharing their work on your social media channels, and/or becoming a patron.

But before you race off to immediately listen to Yoga Is Dead, check out what Tejal and Jesal are doing in addition to the podcast:

Jesal is currently working on a 2020 People of Color to Watch in the Yoga World list in partnership with Sophie Griffiths. She’s also releasing a marketing for Instagram course. Additionally, she’s creating and sharing anatomy and biomechanics online courses. Learn more at yogawallanyc.com.