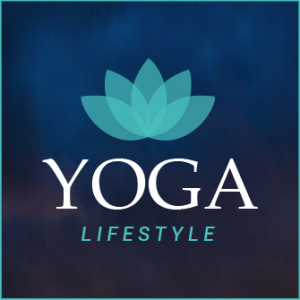 By now, someone you know has probably shared the short but powerful hashtag #MeToo on social media, drawing attention to the prevalence of sexual harassment and assault in what some say could end up being a watershed moment for women’s rights.

Actress Alyssa Milano amplified the #MeToo rallying cry this week (originally started by Tarana Burke) in response to the barrage of allegations of sexual harassment and assault against Hollywood producer Harvey Weinstein, tweetingthat “If all the women who have been sexually harassed or assaulted wrote ‘Me too.’ as a status, we might give people a sense of the magnitude of the problem.”

Many prominent yogis have been brave enough to join in the #MeToo crusade, sharing their personal accounts of abuse across social media platforms. Here’s a look at the some of their stories: 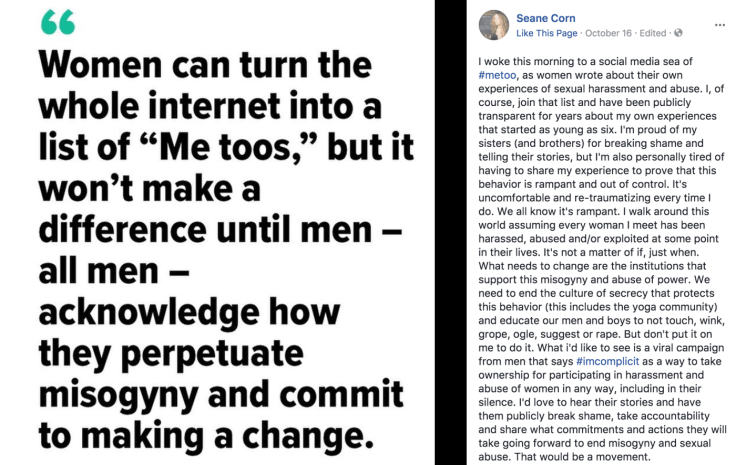 Yoga teacher Seane Cornhas been open in the past about her experiences of sexual harassment and abuse that started as young as age six, but on Monday, she posted that she’s tired of victims having to share their stories to prove that abuse happens:

“I woke this morning to a social media sea of #metoo, as women wrote about their own experiences of sexual harassment and abuse. I, of course, join that list and have been publicly transparent for years about my own experiences that started as young as six. I’m proud of my sisters (and brothers) for breaking shame and telling their stories, but I’m also personally tired of having to share my experience to prove that this behavior is rampant and out of control. It’s uncomfortable and re-traumatizing every time I do.” She continued, “What i’d like to see is a viral campaign from men that says #imcomplicit as a way to take ownership for participating in harassment and abuse of women in any way, including in their silence.” Read the rest of Corn’s #MeToo post on Facebook.

“I was 11. He was twenty-something. I don’t remember his name, but I still remember where he touched me. I was 12. He was my music teacher and he let his hand roll down my breasts as he passed the instrument over to me during my weekly lesson. He was in his 30s. I said nothing bc I thought it was ‘cool’ that my teacher liked me. He was married and three times my age with kids of his own. Sick.” Read the rest of MacGregor’s #MeToo post on Facebook.

Yoga teacher and best-selling author Rachel Brathen (known on social media as Yoga Girl), revealed that she almost DIDN’T post a #MeToo story, because she’s never been “brutally raped,” but then she realized that like so many others, she did have experiences to share:

“I forgot about that time I was on the beach with my dogs when a guy approached me, openly masturbating, looking me in the eye as he ejaculated next to me. I forgot about the three times in my life (three!) I was drugged while out dancing, probably with the intent of rape. All three times I was lucky enough to be found by a friend before something awful happened (more awful than having an unknown substance slipped in your drink that left you vomiting and unconscious, that is). I forgot about the time I was waiting for my turn in a bathroom line and a guy walked by and casually shoved his hand up my skirt and tried to pry his fingers up my vagina.” Read the rest of Brathen’s #MeToo post on Facebook.

Yoga teacher and acclaimed author Donna Farhi shared her story on Facebook of being harassed by a senior male yoga teacher:

“As a young training teacher in my mid-twenties, I had been encouraged to attend a class with a visiting senior teacher, touted as an extraordinary protégé. At the beginning of the class, while practicing Half-Dog Pose at the wall this male teacher strutted over to me, smacked me across the back and barked “Not enough”. Then, later in the class when we were all seated in Baddha Konasana (Bound Angle Pose- sitting with the soles of the feet together and the knees outspread), he sat down facing me, placed his toes against my feet close to my groin, wrapped his arms around my upper back and thrust my breasts forwards close to his face, at which point he quietly asked “How’s your sex life?” Read the rest of Farhi’s #MeToo post on Facebook.

On Monday, Prana Vinyasa creator Shiva Reanoted that she was “joining the collective healing process” by sharing her #MeToo stories, and also bowing to “all who are speaking out and for the men who are also speaking out.”

“For me, it started from a little girl. Lecherous 60+ 3rd grade teacher – daily kissing us girls goodbye with yucky lips and trying to take us to back room of library. Lecherous Santa. Lecherous Photographer.” Read the rest of Rea’s #MeToo post on Facebook.

On Instagram, 90 Monkeysfounder Amy Ippoliti shared her story of being “leered at” as a tween:

“I often share with my yoga students how I developed terrible posture from walking down the streets of NYC hunching my shoulders to try and hide my breasts in order to reduce the cat calls and stares from guys on the street, including Park Avenue doormen. As soon as we were 12 or 13, we started getting harassed as a daily occurrence.” Read the rest of Ippoliti’s #MeToo post on Instagram.

Sarah Platt-Finger, co-founder of ISHTA Yoga and private yoga teacher of Deepak Chopra, shared the #MeToo hashtag on Instagram and revealed her hopes for a better world for her daughter.

“Me too. ✌🏻 I pray that my daughter can grow up in a world where she is valued first for her spark of creativity, her clever mind, and her joyful spirit rather than her body.” Read the rest of Platt-Finger’s #MeToo post on Instagram.

“I can’t think of one particular incident that put me in jeopardy of sexual assault but rather so many incidents when I accepted a man’s behavior as part of the territory of being a woman. It was harassment and although I might have called him out on it, I usually just shrugged it off. I feel guilty for liking the attention at times, for craving validation from others and for putting up with so many degrading comments about my body and my intelligence.” Read the rest of Numis’s #MeToo post on Instagram.

Yoga teacher and body positivity activist Jessamyn Stanley shared on Facebook, “Me, too. And the fact that I don’t enjoy admitting it probably says way more than anything else. Solidarity is powerful—I feel less alone today.”

Yoga teacher and clinical psychologist Bo Forbesshared her stories of abuse and harassment on Facebook using the hashtags from #MeToo to #WeToo:

“In this picture, I’m 14. This is the summer that the worst of it begins and will be nearly continuous in one form or another. This man was a trusted family friend and a prominent businessman in Nova Scotia, where my family lived every summer. We were on a boat, in the open water; he said if I didn’t submit, he’d do the same to my brother and sister, who were hiking on the nearby island. An impossible choice and yet, no choice at all.”

She continued, “Over the last week, we have been reminded that we are not the sum of our individual parts; we are a Collective. And other truths are here to uncover as well. Among them: Gender-related assault is worse for POC: for example, 4 out of 5 of our Native sisters suffer sexual assault.” Read the rest of Forbes’s post and her call for racial and social justice and equality on Facebook.