The human brain can be compared to something like a big, bustling city. It has workers, the neurons and glial cells which co-operate with each other to process information; it has offices, the clusters of cells that work together to achieve specific tasks; it has highways, the fibre bundles that transfer information across long distances; and it has centralised hubs, the densely interconnected nodes that integrate information from its distributed networks.

Like any big city, the brain also produces large amounts of waste products, which have to be cleared away so that they do not clog up its delicate moving parts. Until very recently, though, we knew very little about how this happens. The brain’s waste disposal system has now been identified. We now know that it operates while we sleep at night, just like the waste collectors in most big cities, and the latest research suggests that certain sleeping positions might make it more efficient. 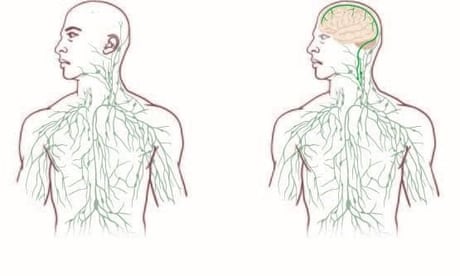 Waste from the rest of the body is cleared away by the lymphatic system, which makes and transports a fluid called lymph. The lymphatic system is an important component of the immune system. Lymph contains white blood cells that can kill microbes and mop up their remains and other cellular debris. It is carried in branching vessels to every organ and body part, and passes through them, via the spaces between their cells, picking up waste materials. It is then drained, filtered, and recirculated.

The brain was thought to lack lymphatic vessels altogether, and so its waste disposal system proved to be far more elusive. Several years ago, however, Maiken Nedergaard of the University of Rochester Medical Center and colleagues identified a system of hydraulic “pipes” running alongside blood vessels in the mouse brain. Using in vivo two-photon imaging to trace the movements of fluorescent markers, they showed that these vessels carry cerebrospinal fluid around the brain, and that the fluid enters inter-cellular spaces in the brain tissue, picking up waste on its way.

Nedergaard and her colleagues also discovered that proper function of these vessels depends on movements of water around the brain, which are carried out by glial cells called astrocytes, and therefore named them the glymphatic system. They went on to show that inter-cellular spaces expand by up to 60% in the brains of naturally sleeping and anaesthetised mice, and that this expansion drives the clearance of waste from the brain by facilitating the movements of lymph and water.

Last month, researchers from the University of Virginia reported the identification of lymphatic vessels in the central nervous system. They demonstrated that the lymphatic system extends into the dura mater, the thickest and outer-most of the three meningeal membranes that envelope the brain and spinal cord. These vessels run parallel to the major veins and arteries, and split to send branches deep into the brain’s crevices. The researchers believe that they could be linked to the glymphatic system, and may be the second stage of the disposal mechanism, which would transport waste out of the brain and spinal cord altogether.

The latest study from Nedergaard’s group, published in the Journal of Neuroscience earlier this month, shows that body posture affects the efficiency of the glymphatic system’s waste clearance. Using fluorescence microscopy and radioactive tracing once again, they showed that drainage of the cerebrospinal fluid worked best in mice lying on their sides compared to those lying on their back or standing up. 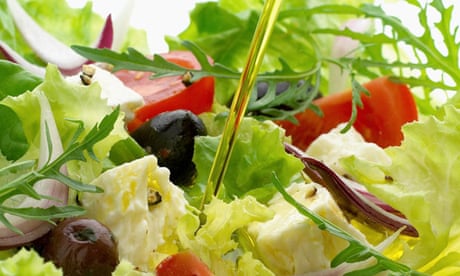 The function of sleep was once deeply mysterious, but there’s plenty of evidence that it is critical for memory consolidation, and it would now seem to be required for the effective removal of waste from the brain, too. Although these studies were performed in mice, preliminary results suggest that lymphatic vessels are also present in the human brain and spinal cord, but further research will be needed to confirm that they actually constitute a working waste disposal system.

Eventually, the link to sleep could have important implications for the treatment of neurodegenerative diseases such as Alzheimer’s and Parkinson’s, all of which involve the build-up of misfolded proteins within and around nerve cells, because of a defective waste disposal system. Indeed, it is now seems clear that good sleep hygiene has a neuroprotective effect and, in line with this, other research shows that sleep disturbances predict the onset of neurodegeneration.

Sleeping on the side just happens to be the most popular sleeping posture for both mice and humans, and so this preference may have evolved to optimise the waste disposal system and thus ensure that the metropolis of the brain runs as effectively as possible.